Growing up as a Geek 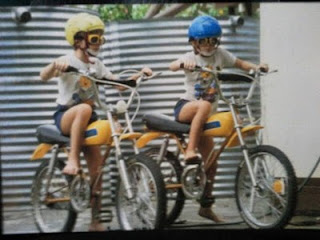 I was born in 1972 as the elder of twins, early on in my life we moved to Papua New Guinea (PNG) North of Australia where my dad was working for Steamships Trading Company or Steamies. They had a major retail presence in PNG and sold all manner of things from food to white goods.

It was a great youth, growing up with out the modern shackle's of a protective society, we would disappear in to the bush for the day with a picnic and a sense of adventure. The other bonus was my Dad was a buyer for Steamies and we always had Reps from Asian companies coming out to see him, they would routinely take us out to dinner and bring gifts for the family. As was the case many of these gifts seemed to be early electronic toys that in some cases were not even available in Australia but had been bought in straight form Japan.

I remember having an early LCD boxing game that had controls on two sides and you you could punch block or crouch, many hours were spent smashing our opponents in to submission.  Later we moved back to Victoria and we stayed with my Mum in a caravan in my grandparents backyard. This is where I got my first introduction to the hacker mentality of Reuse, Recycle and Re purpose. This lesson came in the way that Opa (My Dutch Grandfather) would let us make things out of wood, he had jars of nails on the shelf but if we wanted to make something we had to remove used nails from scrap timber and straighten them on the anvil for reuse. Even later in life my grandfather rebuilt old 10 speed road racer bikes for Christmas, we would go to his home and help him to repair the bikes including resprays and complete overhaul. They even had BMX handle bars so in a way were pre-curses to a mountain bike lol.

I remember getting teased at school that we had recieved second-hand bikes for Christmas, but what I realised later (when I was about 35yo) made me forget all the teasing. The knowledge I gained and the outlook of recycling stuff all came from Opa and for that I am ever grateful. I rang him at that time and thanked him for the time he had taken to impart his knowledge on to me.

He always had all his tools up on pegboard and would know right away where something was. I don't use pegboard in my shack but I have 5 toolboxes (large ones) and a filing cabinet outside for tools and with over 1500 hand tools I know where everything is right away. I am a mad collector of tools because I know that with some scrap and the right tools (sometimes even the wrong tools) you can make something with your own hands, this is a skill I will always thank Opa for.

Later on my step dad was doing an IT course in the mid to late 80's and he bought an Commodore SX64 for his course, I seem to remember him doing a horse betting odds program for his thesis, this was my introduction to hands on computing, I had seen an early 8bit at my uncles house as he was an IT teacher at Ballarat TAFE and had also seen the mainframe with terminals thee that they had recovered from a bank when it became obsolete.

I entered a science comp through high school and came second with a scanning keyboard activated by a single switch on the C64. It would output straight to a printer and did not have any control of the PC, it was just a glorified typewriter for the disabled, I called it the crocodile typewriter.

In my adult life I worked in many jobs, usually to acquire skills to help my self like mechanics so I could fix my own car as I didn't have lots of cash. I don't hold any tickets but have worked in the following areas either as a hobby or as a job.

Now I am not working due to injury from a motorbike accident and I like to tinker, I am a self proclaimed hacker in to electronics and Linux. I am a biker and love to ride my rat bike around the hills in my local area and my latest achievement was to get my HAM radio licence. Oh and I am a geek and proud of it ..........
Posted by hiddensoul at 2:04 AM 1 comment:

I have started to make a bench power supply from an old mini ATX power supply. The supply is really small and does not have room in the case to mount the binding posts for the outlets or the fuse holders for the voltage rails. I am going to mount the supply in to an ABS plastic case but still keep it in its own steel enclosure to restrict RF from the switch-mode. 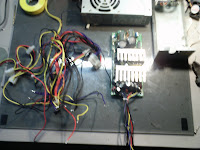 Here is a pic of the first stage of the Hack, removing all the excess power wires, the supply is on the right with the excess wires removed on the left.

Inline fuses in all the rails will be fitted to protect the supply. I have wired the Soft switch of the supply permanently on as I will have a Hard switch in the Mains AC input so that I don't use any power while the supply is just sitting there. An ATX supply supplies 5VDC even when it is 'off'. 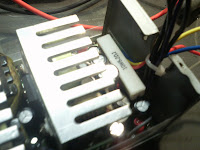 I have hooked up an 8.2Ohm 10watt resistor across the 5VDC rail to ground to load the switch mode as one of two things will happen if you don't, first some supplies will fail to power up if not loaded and some will give stray high voltage (ie Mains) out, there is also the in built fan on the supply to load the 12 volt up.

Here is a pic showing the large ceramic 10watt resistor fitted in to the supply. 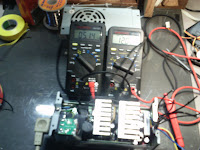 I have just been on to eBay and am going to order some banana sockets, a panel meter, fuse holders and the ABS case to mount it all in to. I already have some nice little rubber feet to mount to it.

The supply on the test bench the meter on the right is reading the +12VDC rail and I was getting 12.06 volts and the one on the left is the +5VDC rail at is at 5.14 volts.

I will be hard wiring the supply with a mains lead and get rid of the C13/C14 connection normally used on a PC supply.
Posted by hiddensoul at 9:45 PM No comments:

I had a go at building a small (apx 1mt long) 6 element yagi with a folded dipole. It is designed with a handle for hand held operation in Radio Direction Finding activities and to be mounted to a small mast I have that extends to about 2.5mt high for QRP operation.


Here is a shot of the mast and aerial collapsed to fit in the trailer I am building to go behind my motorbike. 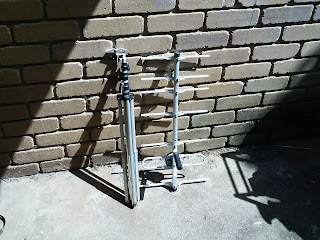 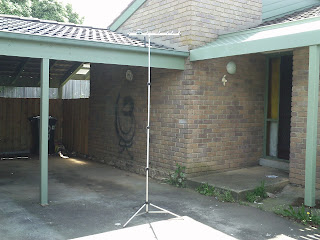 A close up of the yagi atop the mast 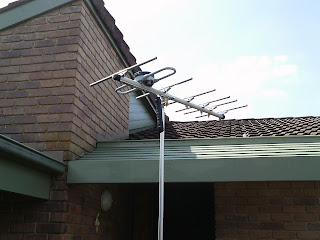 Posted by hiddensoul at 9:37 PM No comments: