Okay so I bought a 30VDC Variable 3 amp PSU from Jaycar a few weeks ago. It is model MP3086 with CV and CC modes. I was expecting the one shown above with 3 pots, one for amps, and coarse and fine ones for volts.. Instead I got a new improved model, unless you like the coarse/fine pots!

So of course with anything new you need to follow Dave from EEVBlog's advice.. Don't turn it on tear it apart so that's what i did..
Okay so first impressions from the photo above.. Nice secure soldering on the mains connections, shake proof washers on the earth wire and extra covering on the mains feed, see that black rectangle on the right centre ? Here it is closer up...

It is a real clunking power switch on the mains, so no standby current usage, Yay a thumbs up..

Rectifier Board with room for two more transistors
The Main Power board looks like it has a real Rubycon capacitor, the screen printing looks good and it does not look like a rip off

LCD Control Board all SMD, the bodge wires on the right run to the back light, keyboard board bottom left with ten turn pot for volts selection underneath 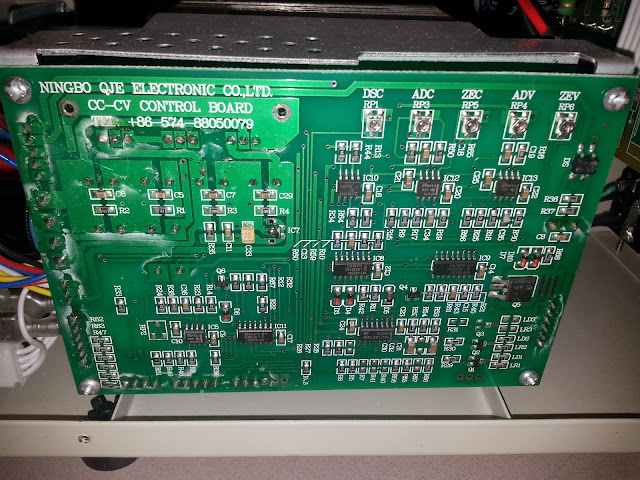 The Voltage and Current control board, there is nothing on the other side apart from a few through hole caps and a voltage regulator on a small heat-sink, notice the flux residue on the through hole hand soldered joints, not good how hard is it to clean a a board ? Here are some close ups of the cruft left behind after soldering. But hey the Ningbo QJE company gave us their phone number if you want to call and complain to them about it :p 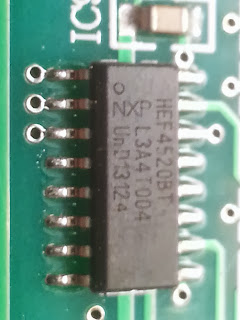 NXP Chips a counter IC and a logic gate, some more quality parts to go with the Rubycon cap... 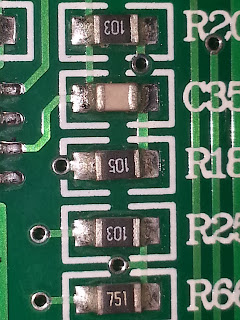 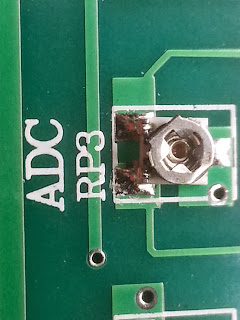 Nice SMD soldering, re-flowed not hand done ! This is one of the trimmers to calibrate it all 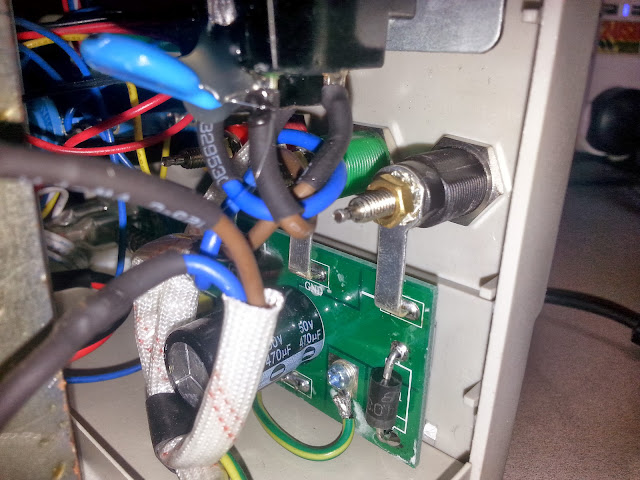 Nice thick bus bars to the connections on the front panel with shake proof washers as well, excellent job. 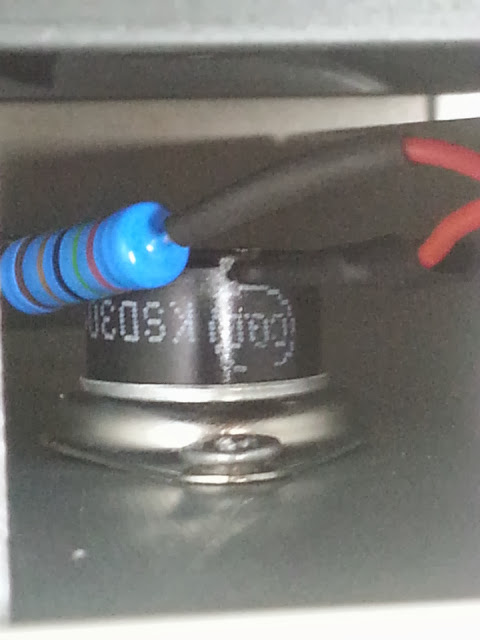 Thermal switch for the fan, wired in series with fan it is rated at 5 amps and 50 C cut in temperature but cuts in before that,

Okay now for some testing....
The test set-up consisted of the following. 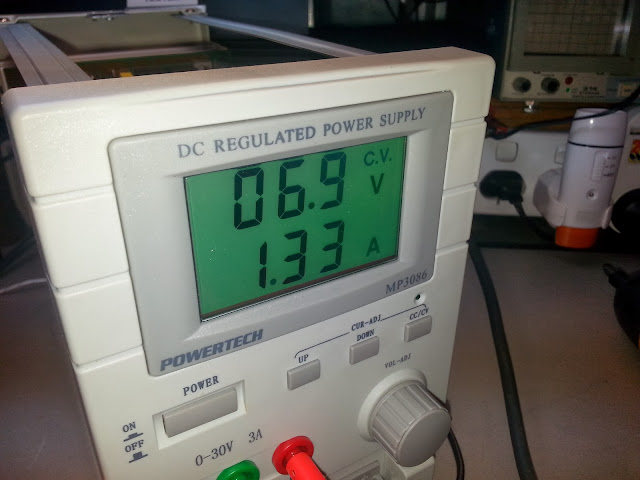 12 Volt Light globe pulling 1.33 amps at 6.9 volts, this tested at about half of the maximum amps and the second tap on the transformer had just switched in at 6.8 volts so I was dissipating the most heat for this amperage in to the heat-sink.

The test set-up, I connected the scope probe to the terminal block on the front directly, I just hadn't done it here yet 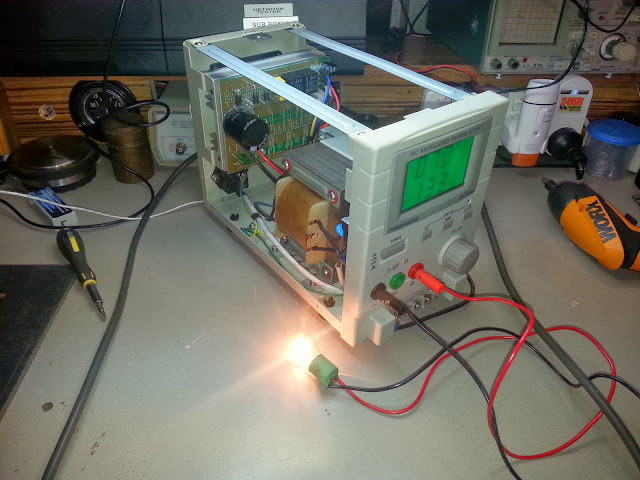 Below is the capture of power on unloaded, there is a small HF ripple at power on then ramp up to full voltage (5VDC) with no overshoot, there is a small amount of ringing when it reaches the set voltage, from power on to stable voltage is about 10 milliseconds.

This is a close up of the spike at power up unloaded, about .5-.75 volts lasting 206 microseconds

Here is a capture of a loaded supply at 7VDC from turn on to full output is 76 milliseconds with no overshoot to speak of.

dB levels with phone acting as meter with smart tools app. The first bump is me pressing the power switch, the second is the mechanical temp switch clicking in, then you can see the fan ramp up to 69dB. the phone was sitting 10cm behind the PSU with the microphone sideways to the fan, the power switch click is quieter as it is at the front while the temp switch was closer to the rear. The ripples in the graph is just background noise in the shack.

If you look between the cursor marks on the timebase below you can see two little ripples lasting about a second, this was when the fan switched in but was brief and low in amplitude. It may have just been induced noise from the arcing in the mechanical temperature switch for the fan as its contacts closed.

Here is the temperature run at 7VDC 1.33 amps from cold (I did this test first after leaving it off overnight) Starts at about 26c the shack temp, ramps up to 43.9c in about 2 minutes then settles to around 34c and stays there. I ran it longer then this graph loaded and the temp was stable and didn't run away at all which it shouldn't pulling 9 watts from a 90 watt supply. 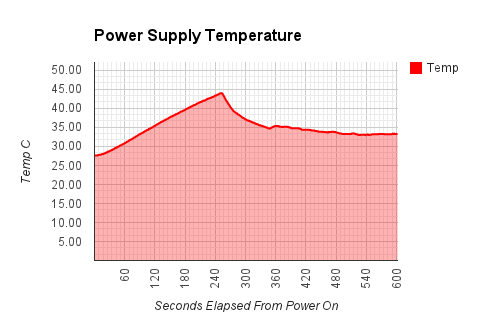 All in all for the price I am very happy with it, well built steel case, the front panel is plastic but has steel rails running from it to the back panel for support.

So what don't I like ? Well not much the only things are as follows.


Apart from that i really like it and it actually goes to 31.5 Volts

Photos of the shack all setup 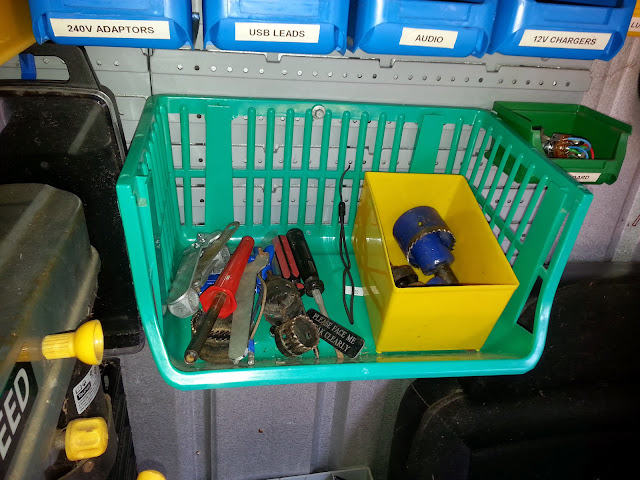 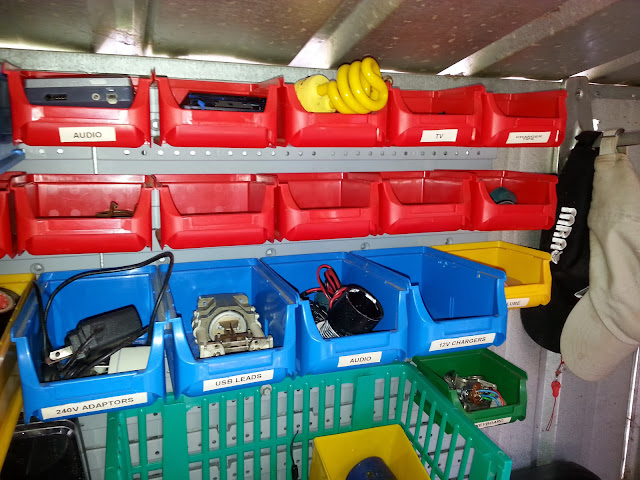