Well Mick has been up to it again, he has been fiddling with bits and pieces of electronics and has come up with an amp for his guitar. I will leave it to him to describe it in more depth as it is pretty out there.
Posted by hiddensoul at 6:19 AM No comments:

The HACEduino "2009/328" is a powerful development board based on the ATMEL ATmega328P-PU AVR micro controller, and is still FULLY compatible with the Arduino Duemilanove and its shields, so basically it is an Arduino clone

When you purchase a HACEduino "2009/328" you will get a board with a small micro controller, this is a whole computer on a small chip, in this case it is an ATMEL AVR ATMega328P-PU.

The HACEduino's design is quite simple, and its design was intended so as the micro controller could easily communicate with a variety of devices, and could be programmed with your computer with a simple design IDE or Integrated Design Environment without the need for sophisticated hardware to program it. In fact, the software, your HACEduino and a handful of components are all that you need to get started.

A standard HACEduino "2009/328" features 14 Digital I/O pins, These can be inputs or outputs, which is specified by the program, known as a sketch which you create in the IDE. The HACEduino also has 6 Analogue In pins, These dedicated analogue input pins take analogue values (0-5v), for example voltage readings from a sensor and convert them into a number between 0 and 1023.

There are also 6 PWM (pulse width modulation) Output pins, These are six of the digital pins that can be reprogrammed for PWM output using the sketch you create in the IDE, the PWM output allows you to create pseudo analogue output voltages(0-5v)

The HACEduino can be powered from your computer's USB port, a USB charger, or an AC adapter. If using an AC adaptor then a 9 volt one is recommended, it will need to have a 2.1mm barrel tip, centre positive to use the powers socket although you can also connect to the Vin pin on the HACEduino.

If there is no power supply plugged into the power socket or the Vin pin then the power will come from the USB socket, however as soon as you plug a power supply in to the HACEduino it will automatically switch over and use it.

When operating the board with an input voltage between 12V and 14V excessive heat generated by the voltage regulator may damge it. Damage caused by this is not covered by the warranty you get on the HACEduino.

Posted by hiddensoul at 5:46 AM No comments:

G'day All,
it's been a while but I'm back!
(too many Projects, too little money)

Iv'e been working on a Starter Motor for the Turbo Jet project,
I don't know weather you can make it out from the pix but it's a Cox .049 ci
with a puta fan blade attached! 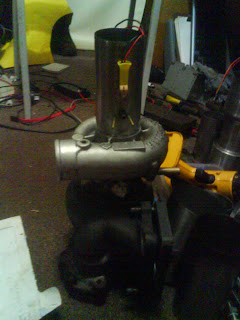 (yes Brad it IS the same motor I used on the model boats we made as teenagers!)

Appearntly people tried using puta fans as ducted fans in the early days but,
found them to be useless cos the crappy plastics they were made of used to
fly apart when exposed to 22,000 + rpm
(I wonder why?) 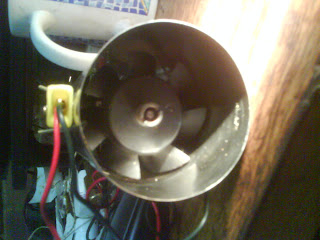 But thankfully puta fans now are made out of tough ABS plastic,
which should be up to the task!
Some of the better quality fans are actually balanced!
(you can see the dremel marks on some the back of the blades!)

Cox went out of buisness in Feb 2009 but Iv'e found a shop
in Canada that has a warehouse full of motors and parts!
(and he does bulk lots too! I bought 6 piston/conrod/cylnder assys for
less than 30 bucks au, including postage!) 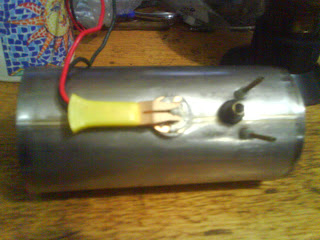 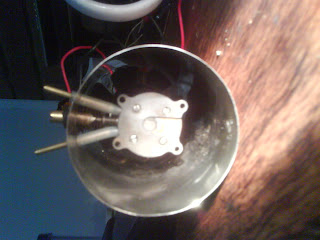 I have yet to fabricate a bracket to mount the
motor in the "Duct" but as you can see it basicaly
fell together, just drill a few holes in some Stainless Steel tube and Vioal!
A home brew Ducted Fan,
the stainless came from the inside of a "Thermal Cup"
and is quite lightweight and a perfect fit to the Turbo Inlet.
(just dumb luck!)

The motor in the pix is also rare for other reasons,
it is a single transfer port bore which were discontinued early on cos
they only pulled a measly 10,000 to 12,000 to revs!
The more common one comes
with 2 transfer ports and "Slit Exhausts" they pulled from 15,000 to
17,000 revs!
And the Venom's piston was lightened, polished crankshaft, they had
extra ports and had higher compression
they were capable of 22,000 revs 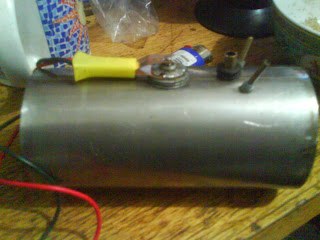 The Idea is use a drill to start the Cox motor then plug the Cox into
the turbo's inlet to start the Turbo Jet!
Cool huh?


BTW,
Ducted Fans actually qualify as a Jet by themself and are also known as Cold Jet's ,
Motor Jets or (my personal favorite) Piston Jets!


Lord,
if you can't make me a better Boy,
don't worry about it,
I'm having a great time as it is!
Posted by hiddensoul at 9:38 PM 1 comment:

I started playing with my haceduino 2009 and couldn't get it to upload sketches to my board, I played for a while trying to hit the reset switch at different times but with no luck.

I hooked the board up to a windows machine and had it uploading almost right away so this led me to my Linux machine being at fault. What to do, what to do....

So last night I played with a few different Linux distros to find one that works "right out of the box" so to speak. It had to be a mainstream distro, had to be a clean install and only need packages available from the repos so as not to have to revert to compiling from source.

This guide is to set up a machine from scratch with the latest Ubuntu release 9.10, it should work with kubuntu and xubuntu as well but I offer no warranty as to the sutablity of this guide to your own hardware and setup

Do a fresh install of Ubuntu Karmic Koala 9.10

At the command line perform the following commands to prepare your system for the arduino IDE.
Now that the system is ready we will install the Arduino IDE, follow the next set of commands to install the latest IDE from arduino.cc via google code

Well all going well that should be it and you will have a Linux environment that you can program your Haceduino in, congratulations and happy hacking
Posted by hiddensoul at 5:06 PM No comments:

Well I am the proud owner of my first micro controller, I received my Haceduino an Arduino clone based on the ATmega328 from Hace electronics and it is really top notch.

It arrived via registered Australia Post which was included free with the ebay item. Here is some pictures of it all packed up, two envelopes anti static foam and an anti static bag all went in to protecting the item.

When I got itI had some problems loading sketches, a quick call to Adrian from HACE got me on track that it was a Linux problem, he asked if the LED on pin 13 was flashing and it was, this was the sketch he had preloaded during the testing of each unit. I tried the IDE on a win machine and it worked fime, I am going to have to play and see about getting the IDE working on my linux development machine.

The product build is excellent and is far above the quality you would expect to find from boards being sourced from china, the attention to detail is great. Adrian even took great pride in telling me that the white ink for the screen printing mask was specially sourced and shipped to the factory for the job as the local ink was inferior and bleed making it impossible to actually read the mask.

It is this attention to detail that has made me a repeat customer and I am eagerly awaiting future products to expand my collection.

Search ebay.com.au for haceduino you wont be disappointed :) thanks again to Adrian and Edmund for a great product, I am looking forward to buying a few Nanos after christmas
Posted by hiddensoul at 1:51 AM 2 comments:

Waiting on my first HACEduino

I just brought an HACEduino it is a arduino compatible on ebay, It was only AUD 31.50 and that included free postage. I found some code to make it talk to a nokia S60 phone running python (my N97 has python installed)

I am thinking of setting it up to start the motorbike remotely that would be cool
Posted by hiddensoul at 7:45 PM No comments:

Sometimes when switching on an Acer Aspire One it shows a black screen. The LEDs may be blinking or just the power button led may be on, and usually the fan is turning. But the screen remains black.

This is a known problem on the Aspire one and is a BIOS fault, fortunately the Acer Aspire One has a BIOS recovery procedure that makes it possible to reflash the BIOS even when the Aspire one wont boot anymore.

This procedure is only meant for non booting Aspire one's and may void the warranty on the unit, so please follow this guide as a last resort.

Extract the files and put FLASHIT.EXE and the BIOS files in the root directory of the memory stick.

Rename the BIOS file to ZG5IA32.FD

Make sure to insert a charged battery and connect the AC supply.

Insert the USB Memory stick into a USB port on the Aspire One.

Press the Fn+Esc keys keep them pressed and press the power button to turn the AA1 on.

Release Fn+Esc after a few seconds, the power button will now be blinking.

Next press the power button once,. The Aspire one will now preform the BIOS flash, under no circumstances should you stop this process. After a few minutes the power button LED should stop blinking, and shortly later the Aspire One will preform a reboot.

All going well the BIOS is now flashed and all the settings will be reset to default in the BIOS
Posted by hiddensoul at 2:06 PM 1 comment: