Well Mark would be pleased,
looks like I'm actually writing a blog!

It all started when I was a Kid and my Dad got me into building and flying Control Line Model Air-Craft,
I can't really remember when I first heard of Pulse Jets but it was around then and, I have been fascinated ever since.
I've always wanted to build a Model of a V1 Flying Bomb (a.k.a. Buzz Bomb or Doodlebug. Best known during the Battle of Britain or more precisely the London Blitz.) and may still will but, to do that we need to acquire a power-plant i,e. a Pulse Jet. When I was a Kid they were banned in Victoria so, the only way to lay your hands on one was to send to the U.S. and mail order it or, build one. The problem there is, not a lot was known about them and, getting plans was nearly imposable! (no Internet back then!)

I sort of forgot (How could I?) until my early twenty's when I met a Bloke who had built one and he showed it to me.
It was BEAUTIFUL! (the fires burn Bright again but,.............die again to embers)

So the desire to have one was put on the back-burner again until, my friend Mark (a.k.a, my personal I.T. Tech., friend, confidant and many other things!) stumbled me a heap of Pulse Jet sites and U-tube's (not knowing of my previous hankerings. He didn't know me when I was a kid!) So the Fuse (so to speak) was well and truly RE-LIT!
And now we come to about a month back and I decide to go to my local Exhaust Joint and bought some stainless tube 2 1/4" (for the combustion chamber) 1 3/8" (for the exhaust pipe [which turned out to be mild steel! oh well )
I cut a pair of triangles out of one end of the 2 1/4" and heat and beat at it for the next 3 days! Till I had it necked down to the 1 3/8" I needed and Mig Welded it all together.
Next I went to my local Honda dealer and got a small spark-plug (NGK CM 6) and then off to the Bolt Joint for a suitable nut and some stainless socket bolts, nuts and 2 large washers all M8 x 1.25. (these are for the L.P.G. injector. More about that later)

Next comes the big decision, Reed Valves or Valveless!
(now having started my time as an Outboard Mechanic I actually knew where to source out petal type reed valves! heh heh sneaky little bastard aren't I!)
But I decided to go reed-less anyway! 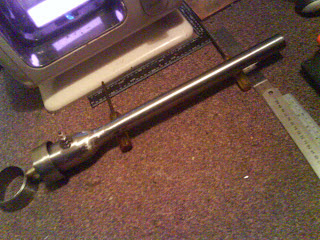 And here's what I came up with;

Looks pretty spiffy doesn't it!
It isn't actually finished quite yet, it needs to have the injector cap affixed to it and then it's ready to fire up!

But last night I had a bout of design frenzy and came up with this sketch! 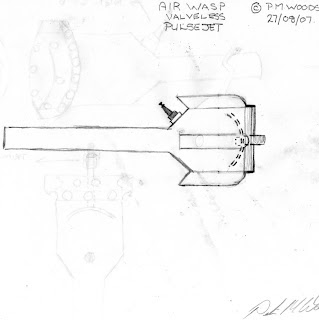 And so the Air Wasp was born!
(sorry about picture quality, my scanner seemed to read what was on the back of the page as well)
Obviously this is not to scale but I'm proud of my artist's impression anyway! (I've never been very good at drawing I usually just picture it in my mind's eye and then make it! [good for revisions that way, they're instant!])

I've had an idea about where to source out stainless stuff, Milking Machine suppliers!
(comes from living in a Rural area and working on a Dairy Farm when I was 17)
No shit the stuff they've got on their shelves is Manna from Heaven to people who are interested in experimenting with Pulse Jets!

Trouble is it's expensive!
But, not as expensive as having an engineer make it up for you!

I spent less than $50.00 AUD all up on building the first one, (pictured above)
It cost me 50 bucks just to acquire 3 pieces of stainless to start the Air Wasp! 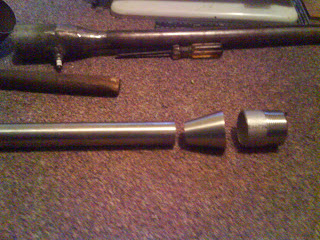 But I'm willing to pay for Beauty, and you'll see from the picture here that the potential is there to come up something really Beautiful!

As you can see the Air Wasp already looks good and I haven't even done anything to it yet!
You can also see that the first one (which I think I'll call the Bush Pig!) looks like it was home-made in someone's back yard workshop, (it was, Mine!) but the Air Wasp will look like a Bought One!
(Don't get me wrong I LOVE my Bush Pig[who wouldn't?] but the Air Wasp well.................!)


P.S, Air Wasp is sort of a tribute to my Dad, (who Passed Away last year). He raced Austin Specials in the 50s and 60s. He called his cars WASp. (Mk 1, Mk 2 and Mk 3.). Wasp stood for Woods Austin Special, which I have altered slightly to Woods Australian Special.

Went to Darren's (where my Lathe is stored) and started work on the Air Wasp. 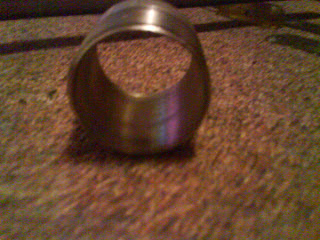 Didn't do a heap, just got out the boring bar and took some meat out of the combustion chamber (it was about 5 mm thick, so I bored it to about 2 mm thick) and 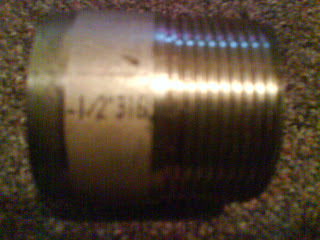 chamfered the rear of the combustion chamber to fit the cone a bit better. 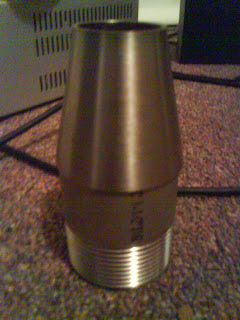 Mark came up with a novel idea for a budget igniter,
"why don't you hook up a flasher-can in series with the primary of an ignition coil?"

Well for the life of me I can't think "why not!" (well it did occur to me that the coil primary may require more Current (Amps) than the can could supply but, we can get around that if we need to! the idea is still basically sound!)

I've been to T.N.T. (my local Auto Parts Supplier) and Terry hooked me up with a 2 wire flasher-can (it can't get any simpler) 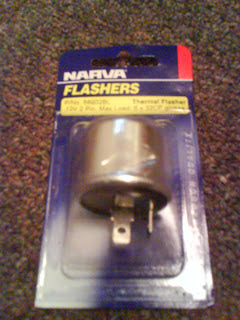 I'll get back to you and tell you how it goes!

And now we get to the bit where I say

It's getting dark, my glasses are dirty and it's getting hard to see to type, I'm hungry and so are my critters!

I'll be back when I have more to update on the build!