Velcro was a great discovery (or was it given to us in a treaty agreement with an alien race) but Ferrofluids are really interesting. A mix of nano sized particles of something like haematite or magnetite with a carrier to keep it all in suspension. The nano particles are small enough that an equal dispersion is maintained by the heat in the system creating thermal agitation.

Some of the ideas these things are good for a killing cancer by injecting some directly in to the tumour and then making it "dance" around with magnets causing friction and local heat that destroys the tumour. Another is replacing the air around the voice coil in a loudspeaker with a ferrofluid, one of the things that a ferrofluid does is behave along the curie effect, as it gets hotter it loses its magnetism, in the voice coil this means that the colder ferrofluid is drawn to the voice coil, as it becomes hotter and reaches its curie point it is no longer magnetic and colder fluid comes in while the hotter fluid is moved to the outside near the heat sink, no moving parts required.

Oh and they look good as well here is a picture from the wikipedia article on ferrofluid's. 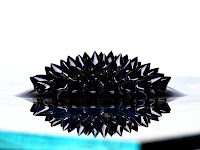 Posted by hiddensoul at 6:23 PM